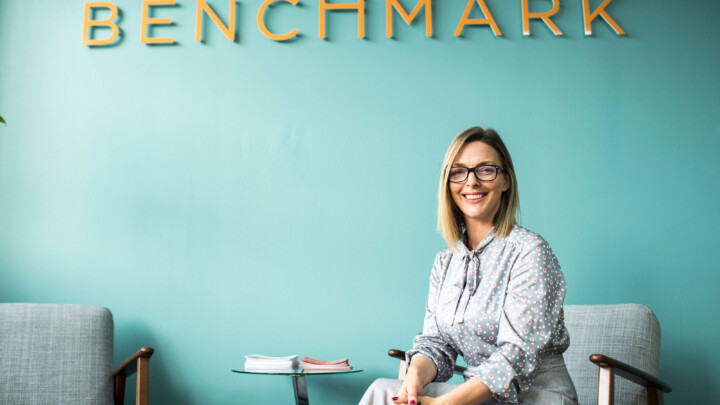 Louisa Harrison-Walker is the Chairwoman of Benchmark Recruit. Benchmark is a well-respected, established recruitment agency in South Yorkshire. August of this year sees Benchmark Recruit celebrate its 15th anniversary, with Louisa now overseeing the company as Chair whilst also holding the prestigious role of Interim Director of Sheffield Chamber of Commerce and Industry.

Louisa is a familiar face on the Northern business circuit, and Benchmark continues to go from strength to strength, so we wanted to chat to her about what it takes to be successful.

When did you first decide to start up on your own and what inspired you?

I spent time, at the beginning of my career, working for a national recruitment company. During that time, I was able to learn about processes, good practise and how to work within ISO accreditations. There was always a thought in the back of my head about how I could work differently, without the bureaucracy of a big business. Then, in 2006, my best friend at the time was facing voluntary redundancy. She had a wealth of knowledge of HR and staff engagement, and it seemed to make sense that we made a go of it!

At the time, we owned a house together – so that’s where we raised some capital. We remortgaged and threw ourselves into our new venture: Benchmark Recruit.

What has changed since you first launched Benchmark in 2006?

Where do I start?! On a personal level, I’ve married and had two children, which has been a lesson in itself. I had to learn how to balance the business with my personal life, whilst also being considerate of my business partner who was at the same stage of her life.

Of course, things like technology and some processes have changed, but my business values have remained the same. We deal with people, both from a candidate and client side of things. We get to know people and their situations; we like to know we are placing the right candidates into the right businesses.

The Benchmark team has grown over the years and we’ve moved offices to accommodate that. I’ve also taken a slight step back recently, to oversee the business as Chair. This has been great, and I’ve given some employees shares to recognise their contribution and commitment over the years. One colleague started seven years ago as an apprentice and is now a shareholder of the company. Another colleague is now Managing Director. It’s important to me to acknowledge their dedication to the business and to give them room to grow as well. Operationally, I know that the business runs well and I can work as a mentor and guide to the staff.

How did 2020, with all its ups and downs, affect your business?

March was a shock to the system. We saw a number of recruitment freezes across our clients. It was like the tap was turned off in March and April!

Just a couple of years into starting Benchmark, we were hit with the 2008 recession, which helped us to prepare and be ready to take on 2020’s challenge.

Similarly to 2008, some industries grew and needed new staff, despite the climate for many. We have a loyal customer base who know and trust us, so we managed to weather the storm. In fact, November 2020 was one of our strongest months for a long time.

There are some green shoots of hope around, it’s just finding them and nurturing them.

What strategies have you put in place to keep surviving/growing during these times?

I’ve always been careful with cash flow and keeping money in the business, so we were fortunate there. We knew that a lot of our client base would be struggling, so instead of ramping up a sales pitch, we offered advice and information to help see them through. This included sharing information on grants, mental health and other resources. I like to think that this added extra value to what we do, and that it benefited our customers.

I’m a big advocate of mental health and supporting colleagues, so I ensured we had things in place to keep everybody connected. This included video catch ups and socials. Fortunately, we have been a cloud-based business for the last decade, so moving to remote working was far easier.

One of the positives from such a tough year, was that people are now recognising the benefit of flexible working. Over the years, I’ve seen so many people, especially working parents, who have not been considered for roles due to the fact they need to work from home or have flexible hours. So much talent has been lost! Hopefully, now, people will see the benefit and increased productivity that comes from a flexible approach.

What one piece of advice would you offer to someone running a recruitment business?

Be prepared that most people will have a preconceived idea of what a recruitment agent does. There are so many cowboy businesses and CV sifters out there – you need to stand above that. Be prepared to shatter their negative illusions of the industry!

Get networking and meeting people. That way, you can build valuable relationships and personal connections. Remember that not everybody will be thrilled to hear from you; many think it’s all ‘sell sell sell’. Challenge the norm and make yourself different! Oh, and grow a thick skin!

When you start to build your teams, look at attitude, enthusiasm and personality – not just experience. Recruit your own staff in line with your values and hire people who are personable. You can teach people how to recruit, you can’t teach them how to be enthusiastic.

A donation of £100 was made to Sheffield Churches Council for Community Care by WeDo Finance on behalf of Louisa for this interview.

Benchmark Recruit values its connections in the business community and work to support the growth of businesses and individuals.
https://www.benchmarkrecruit.co.uk/