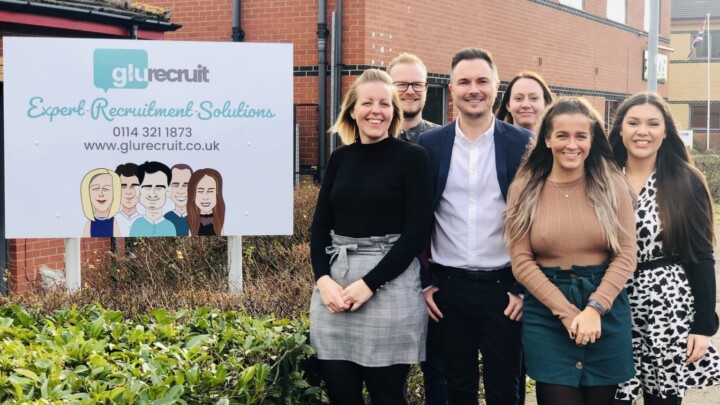 Rob Shaw is the Managing Director of Glu Recruit, a growing recruitment business in Yorkshire. With over a decade of experience in recruitment, from a large household name to a small independent agency, Rob has seen the world of recruitment change and thrive.

Why did you decide to start your own recruitment agency?

I’ve worked in recruitment since 2005, where I started working for Office Angels in Sheffield.

In 2007, I completed the company’s ‘Ascent’ Management development and joined the Nottingham branch as manager in 2008. At the time, the branch was 43rd in the league table out of 100 offices, and in my time there I took it up to 2nd position. We continued to succeed, despite the recession, and it made me realise that this was what I wanted to do! I was then promoted to Senior Branch Manager in Sheffield and stayed there before moving to an independent agency in the city.

Around this time, I was going through the process of adopting my two children. Becoming a Dad meant that I wanted to look at my career and see how I could find some balance to ensure I spent as much time as possible with my family. I decided to take time off to see where life would take me and I became a candidate myself!

Whilst I was a candidate, I was speaking to a potential employer who asked why I wasn’t working for myself. I told him I needed ‘the safety net of a salary’ and would rather find a role. He pointed out that I wasn’t getting a salary anyway – so why not try it?! So I did!

How did you start up?

I had covenant from my old employer, and wanted to be ethical regardless, so it was literally a case of starting from scratch!

I actually bought a desk, phone and second-hand laptop, and set up my office in the garage. You learn as you go along – when there’s only you in the business, you suddenly have so many roles! You’re the salesperson, the marketing person, the office person – everything!

It got to a point where I had too much work for just one person, so I recruited someone else and got an office. From there, we’ve grown organically and we are now a team of eight!

My initial plan was to work from home and be a flexible Dad that can do the school runs! I thought I’d place one person a month into a job, get a bit of income to tide us over and be the flexible parent. But that’s how recruitment works, it’s so fast paced!

How has the pandemic affected your business?

The permanent side of the business virtually stopped overnight, aside from some key worker positions. However, the temporary side of what we do was what kept us afloat. People needed short-term solutions and we were able to supply them.

As I mentioned before, I’d worked in the last recession, so I knew what to expect. I saw some excellent consultants being let go from agencies and knew that it was a good time for us to take the opportunity to recruit and grow to fight through the year.

Now we have a stronger army of staff ready to get back to normal. We haven’t had a loss-making month and we’ve actually exceeded targets in a couple of the months too.

Has it all been plain sailing, what advice would you give to others?

It’s been one of the hardest things I have ever, ever done! I’m glad I’ve done it, don’t get me wrong, but it’s been a lot of work to get to where the business is today.

To get something new off the ground and working well, it’s a real hard slog.

It’s worth it – but don’t underestimate how much work it is!

In return for this interview, Rob asked for a charitable donation to Bluebell Wood Children’s Hospice and Paces Sheffield.